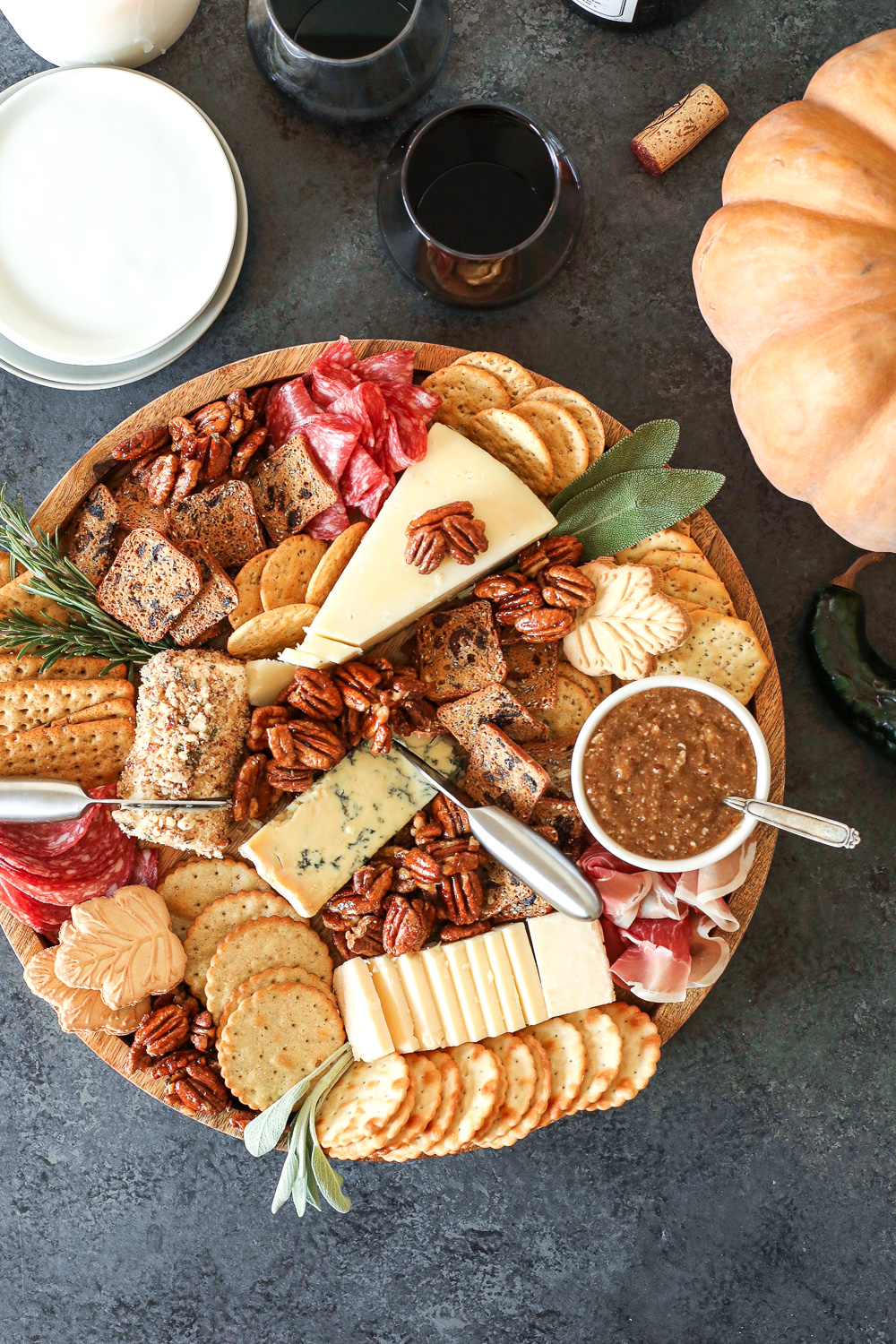 Tis the season for charcuterie and this girl is PUMPED!  I am teaming up with American Pecans to bring you a pecan packed board for your Thanksgiving festivities and beyond. Pecans really do have a place throughout your holiday table, from appetizers like this to pecan pie. To prove it, American Pecans created the Pecan ThanksEverything Pie, which showcases eight holiday recipes in one pie, which you can find at AmericanPecan.com/thankseverything.

This board has the classics – cheese, meats and crackers, but is taken to another level with Maple Sage Pecans and a Honey Cinnamon Pecan Spread that you will want to slather on everything. I am also going to show you how to easily blend up some pecans with rosemary and garlic powder so you can coat your goat cheese and make it look super fancy and impressive.

The Maple Sage Pecans are such a flavorful stand and complement any variety of cheese. The best part? Pecans are a powerhouse when it comes to nutrition so they are doing big things to balance out the rest of the holiday madness. Pecans not only have the protein you know and love, but they also have fiber, beta-carotene, vitamin E, 60% DV manganese, 40% DV copper and 10% DV zinc and lots of great phytonutrients. Packs a punch right?

Plus, did you know that pecans are the only major tree nut indigenous to North America? When you cook with American Pecans, you’re supporting American grower and sheller families. 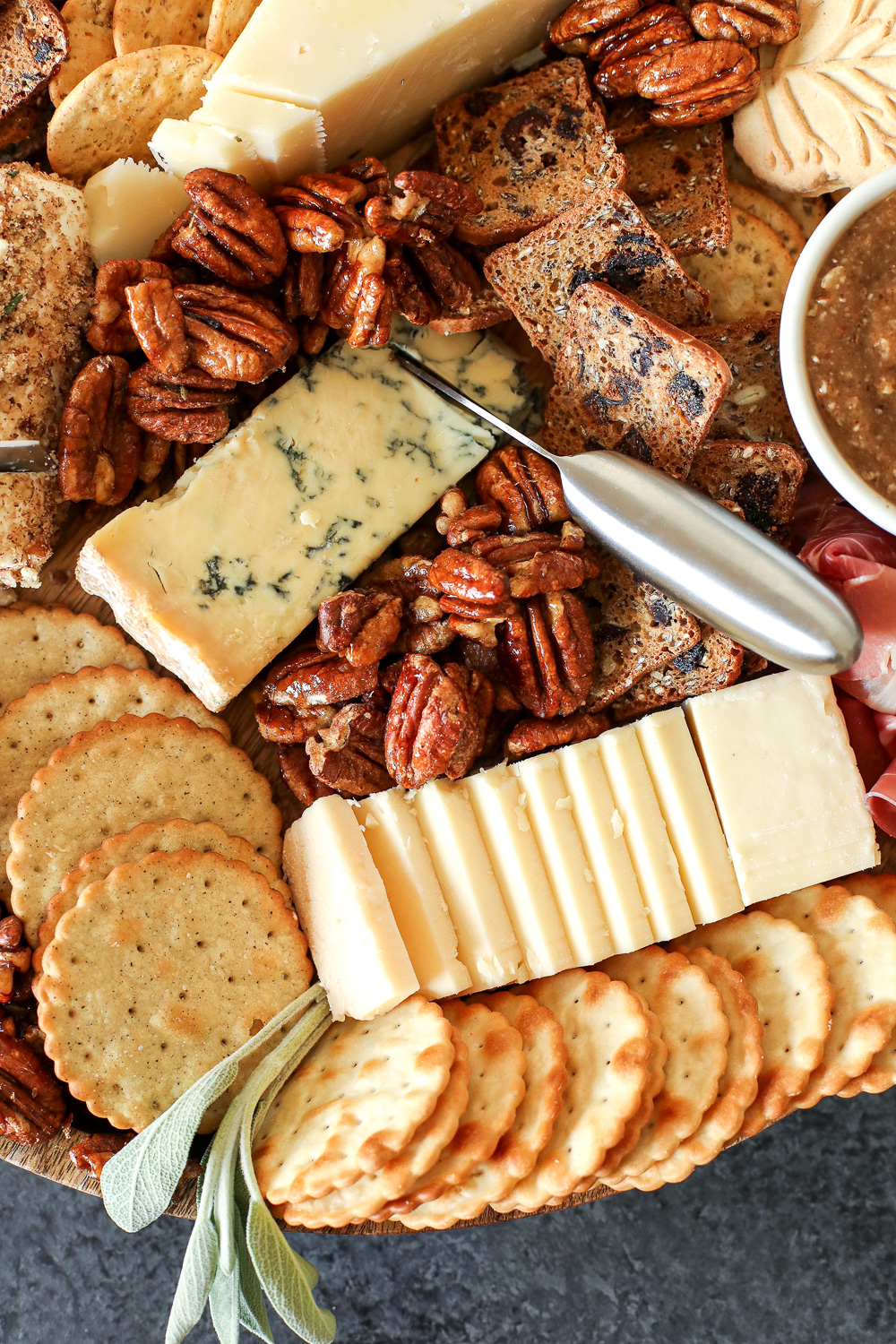 I love a variety of crackers in my charcuterie boards because it adds interest to the board and everyone will want to try each kind.  I bought a mix box of crackers at Trader Joes that is perfect for this! 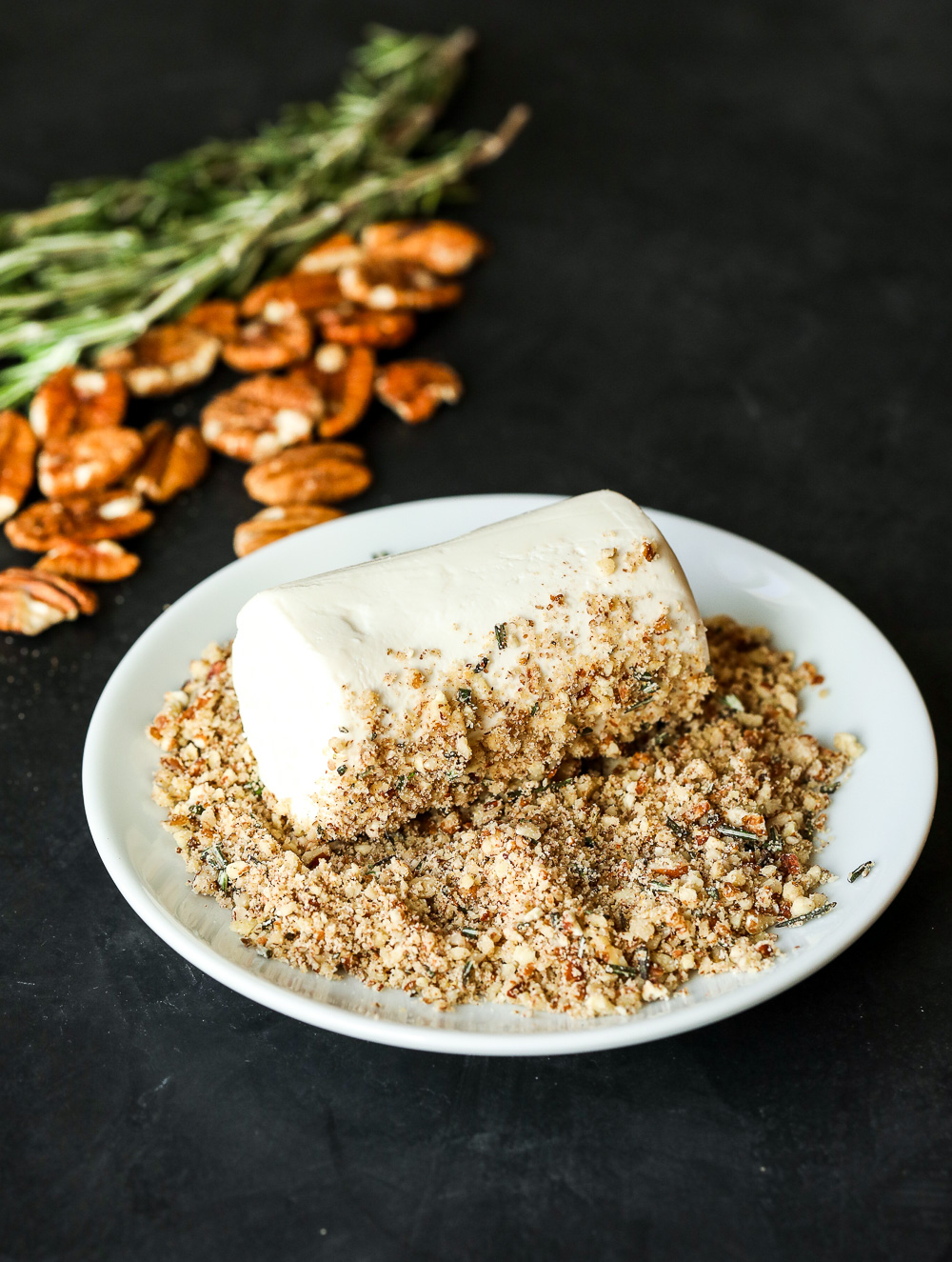 Oh yeah this goat cheese log is incredible! Just buy a 5 or 8 oz log from the store, blend up the toppings and roll it around!

It’s beautiful and delicious! For a thanksgiving charcuterie board I love to add ing rosemary and sage around the sides for color. 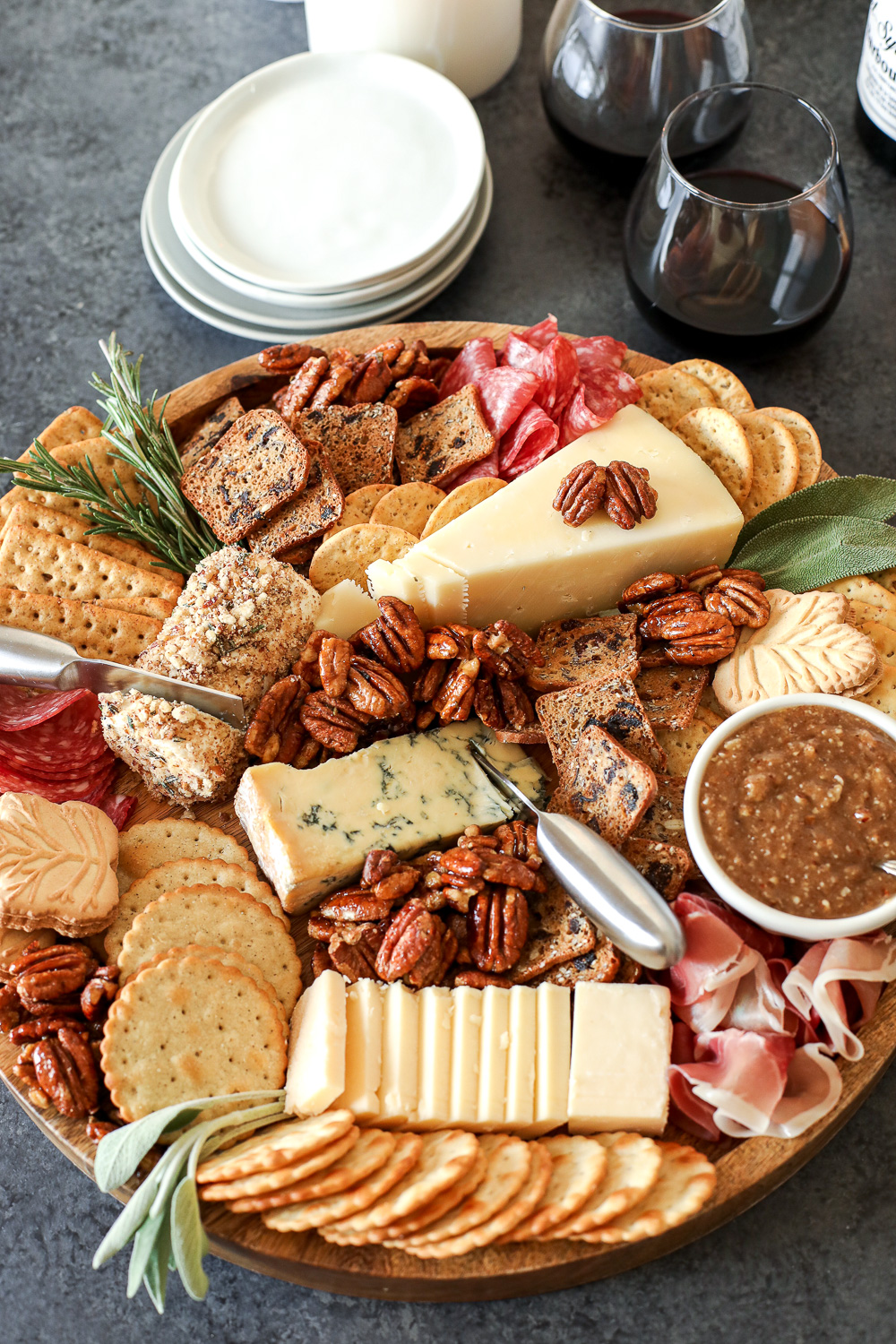 This Honey Cinnamon Pecan Spread is so simple to whip up in the food processor and a real crowd pleaser.  I love to get a cracker, spread this on top, then add cheese – it’s the perfect combo! 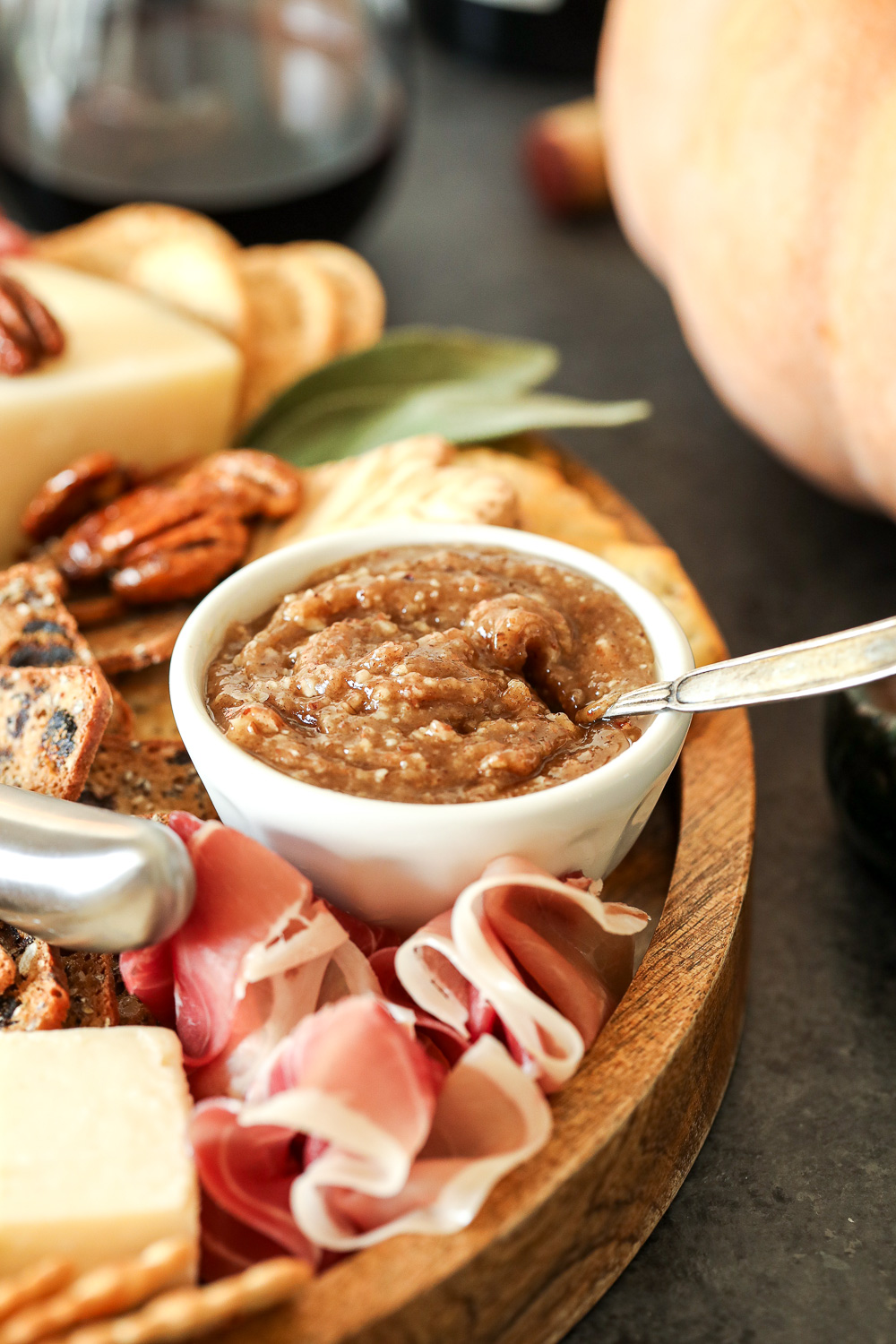 Pin the image below to save this Thanksgiving Charcuterie Board with Maple Sage Pecans for later!

Gingerbread Mixed Berry Trifle {Paleo}
Scroll to top
Your information will *never* be shared or sold to a 3rd party.